REACHING SOUTH FLORIDA WITH YOUR MESSAGE

South Florida businesses, non-profits, and municipalities have a unique opportunity to reach customers and communities for a fraction of the cost of traditional advertising. BECON (Broward Education Communications Network) can help you bring your message to viewers from West Palm Beach to the Florida Keys.

BECON’s television station, WBEC-63 (BECON-TV), reaches a larger potential audience than nearly every other station in South Florida. Increasing numbers of television viewers are “cutting the cord” and choosing to watch local television via over-the-air signal instead of cable or satellite. BECON-TV’s digital broadcast signal reaches over-the-air viewers in all of Broward, Palm Beach, and Miami-Dade counties. And those who use cable and satellite providers, including DirecTV, Dish, Xfinity, and local cable systems, all have BECON-TV in their channel lineup. BECON also operates WKPX 88.5-FM, a radio station reaching all of Broward County.

By placing your message on BECON-TV, you can tell viewers throughout South Florida about your work, your services, and your support for public education. While non-commercial announcements don’t use the same tactics as most traditional broadcast advertisements, they do present your organization in the most positive light to the surrounding community. 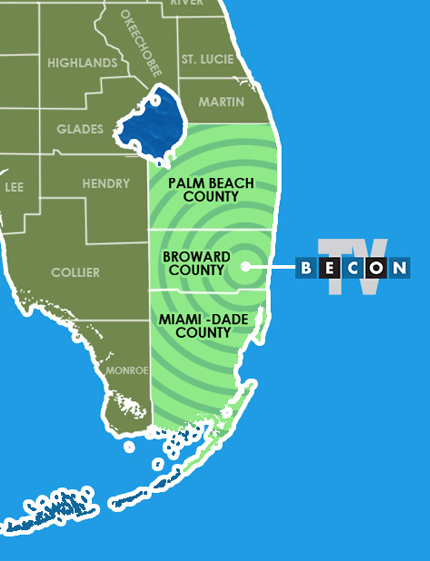 HERE ARE SOME OF THE WAYS YOUR ORGANIZATION CAN BE FEATURED

To learn more, email your questions and contact information to gm@becon.tv, or call me at 754-321-1000. Let’s discuss how we can work together to advance your message and support public education throughout our community.

We use cookies on our website to give you the most relevant experience by remembering your preferences and repeat visits. By clicking “Accept All”, you consent to the use of ALL the cookies. However, you may visit "Cookie Settings" to provide a controlled consent.
Cookie SettingsAccept All
Manage consent

This website uses cookies to improve your experience while you navigate through the website. Out of these, the cookies that are categorized as necessary are stored on your browser as they are essential for the working of basic functionalities of the website. We also use third-party cookies that help us analyze and understand how you use this website. These cookies will be stored in your browser only with your consent. You also have the option to opt-out of these cookies. But opting out of some of these cookies may affect your browsing experience.
Necessary Always Enabled
Necessary cookies are absolutely essential for the website to function properly. These cookies ensure basic functionalities and security features of the website, anonymously.
Functional
Functional cookies help to perform certain functionalities like sharing the content of the website on social media platforms, collect feedbacks, and other third-party features.
Performance
Performance cookies are used to understand and analyze the key performance indexes of the website which helps in delivering a better user experience for the visitors.
Analytics
Analytical cookies are used to understand how visitors interact with the website. These cookies help provide information on metrics the number of visitors, bounce rate, traffic source, etc.
Advertisement
Advertisement cookies are used to provide visitors with relevant ads and marketing campaigns. These cookies track visitors across websites and collect information to provide customized ads.
Others
Other uncategorized cookies are those that are being analyzed and have not been classified into a category as yet.
SAVE & ACCEPT